This article by Camille Roth, Jonathan Saint-Onge and Katrin Herms has been presented at Complex Networks 2021: the 10th International Conference on Complex Networks and their Applications in December 2021. Here is a brief summary:

On the whole, the paper significantly nuances the traditional “echo chamber” narrative by focusing on Twitter quote trees. By differentiating affiliation from interaction links, which are both concurrently observable, this contibution describes a variety of cross-cutting patterns and roles. The issue of online echo chambers is broadly related to socio-semantic assortativity (or fragmentation): social network clusters exhibit semantic similarity, and this homophily is also typically higher with affiliation than interaction links – both are old results. However, focusing on quote trees on Twitter makes it possible to contrast both link types (namely, quotes and retweets) on short-term and meso-scale events, rather than at the usual and often aggregate level of either links or clusters.

While the political valence (here Ideal Points) of retweeters generally reflects that of root tweet authors (i.e., a “baseline” audience), quotes attract a more central audience: reframing is also recentering, especially for large trees. The less politically central a root is, and the larger and non-central its audience (tree), the more quotes come from a diverse and, on average, central public. This back-and-forth movement persists in secondary quotes, albeit in an attenuated and non-monotonous manner. This finding is nuanced when focusing on user attitudes: while some users (especially non-central ones) quote root tweets of a distinct valence as the ones they normally retweet, some users do not, reminiscing a behavior more akin to echo chambers.

An open-access post-print is available here. 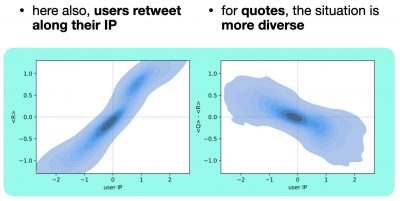 The team is now opening several doctoral students and post-doctoral researchers to work under the ERC Consolidator grant Socsemics, focusing on internet […]

Sunbelt is a the main venue for social network analysis and its 40th edition will take place in Paris in June 2020. […]